How DevOps Helps your Business Process become Faster and Stronger 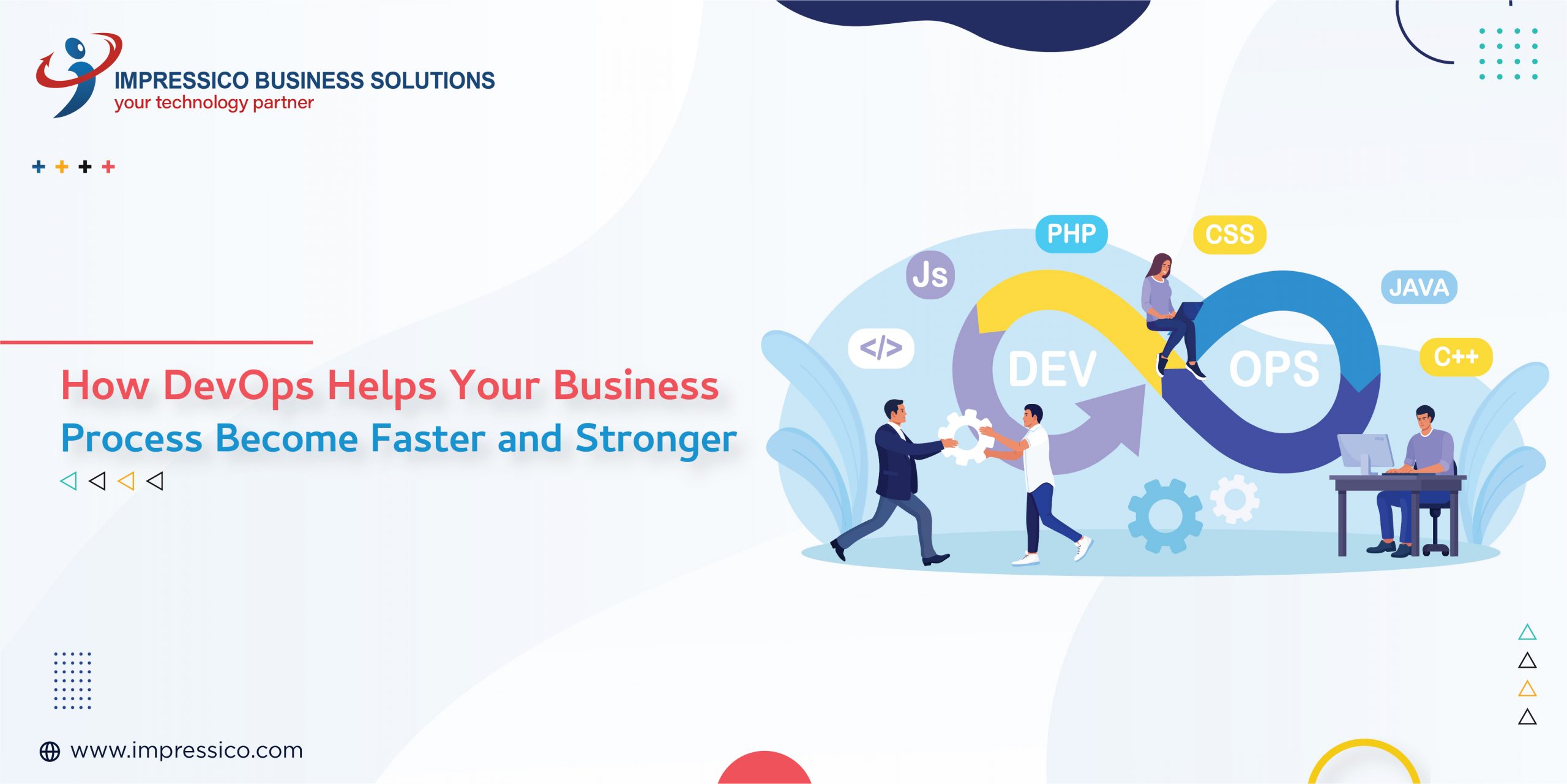 The current market is full of twists and turns around every corner, which requires agility and the ability to adjust to the constantly changing state of affairs. “Agility” is the term that best defines what is required to remain competitive in today’s competitive world.

It’s impossible to make any progress if you’re not prepared to adapt to the circumstance and adapt to it in a way that benefits you. This is true for all industries, but it is especially true in the field of software development.

If you’re thinking of creating a mobile or web-based product, agility is the key to tangible results such as speed of work, the introduction of new features, the efficiency of the team, the optimization of the product, and the list goes on. In essence, being agile is an advantage for both the company and the product in the short term and over the long term.

It’s even more evident in the outsourcing sector, in which everything is dependent on their ability to adapt and surpass. The DevOps approach to implementation is just one way to be more flexible and, thus, more competitive.

However, let’s start with definitions.

DevOps is a multi-functional method of working. The DevOps method is the blend of two distinct components that comprise the development of software, namely operations and development (also known as infrastructure management).

In essence, it’s an outcome of streamlining the organisation to improve its flexibility, make it more dynamic, and eventually make it more efficient. This was necessary because of the ever-growing sprawl of organisations that use too many resources and slow down the general agility of the team of developers.

In this sense, DevOps is more of an attitude than a thing. It’s about cooperation, being on the same page, meeting the common objective of making improvements to every aspect of the product, and reacting in a timely manner to changing conditions and evolving needs.

Let’s take a line from Daft Punk: “Work it, create it, work at it, and take it on.” “Improve it, make it stronger, quicker, more powerful.” That’s what the idea behind DevOps is all about.

Why is DevOps necessary?

Two words: mobility and the ability to adapt. Feedback from customers and testing are essential when it comes to creating an excellent product that can surpass its initial snap. This is why it is sensible to adjust according to the requirements to ensure that the product is sufficient and able to do its job. But it’s not an easy task to accomplish because of the long iterations and the need to scale large teams to support the cause.

The primary task of a DevOps specialist or engineer is to ensure that the software functions both from a developers’ viewpoint as well as from an infrastructure perspective.

When you adopt a DevOps culture, it allows you to bring about changes quickly and in time. The result is an overall superior product, which is more profitable for business.

The most significant benefits of DevOps from the business perspective are clear: it is all about time to deliver.

Through substantial streamlining and restructuring of the workflow, the process itself becomes more efficient and dynamic. This, in turn, reduces the time it takes to complete and is more efficient while not damaging things when going too fast.

The combination of automation and thorough testing dramatically increases speed while reducing the overall workload.

It is basically faster because it moves through shorter stages, i.e., continuous integration and delivery (aka CI/CD). This lets you gradually implement tiny changes that are beneficial to the organisation overall.

Additionally, shorter iterations mean that, even if there are occasional failures, their consequences will be smaller, which makes it much easier to handle the issues. The dreadful idea that everything will go down in one fell swoop is virtually nonexistent when using this method.

A Better Environment for Technical Scalability

Scalability is among the most important aspects of every project. If the product can take on a load and go on with the task, that’s an indication that it is working efficiently. If not, you’re aware of what that signifies. As cloud computing became more popular, it became a huge issue.

DevOps uses certain methods to guarantee greater capacity. In essence, scalability refers to not only how servers and networks can continue to do things, but also the tools used to allow that to happen.

It is crucial to set up the system to be flexible so that, when needed, it can increase the amount of energy consumed and reduce it when it is less.

The issue with such tools is that they require continuous improvement — adjustments in bandwidth, server, and storage capacity.

Superior Communication: Everyone on the Same Page

The primary advantage of implementing DevOps principles is a substantial improvement in the efficiency of communication. It is always an advantage when everyone is in the same boat and each member of the team can participate in the process.

Communication and collaboration are the main focus of the DevOps method, and its implementation can create a more creative environment that will positively impact your product’s quality.

For example, having a streamlined communications system helps get the team together. It can also assist in onboarding new team members. It also assists in describing the goals of the present time.

DevOps automates routine elements in the process of development, allowing developers to concentrate on essential and more complex components.

In direct consequence of better communication, the team’s scalability takes a huge leap ahead. Most of the time, the team members require some time to become familiar with the process. If the DevOps strategy is followed correctly, it reduces the amount of time needed for adjustments since everything runs like a well-oiled engine.

This means that you won’t have to fret about the possibility of the necessity of scaling your workforce, which could cause disruption to the flow of work. DevOps helps make this process simpler and more efficient.

Learn more about the structure of the DevOps team.

The process of development is rife with routine tasks that simply must be accomplished. It is time-consuming and influences the motivation of the people who have to do these tasks. While essential, these activities typically consume precious time that could have been utilized to accomplish something more important.

DevOps can make it an issue with the aid of automation. Not only does it provide an efficient workflow, but it also aids in monitoring and reporting on everything. This is particularly important for testers, who cannot afford to overlook something in the midst of coding.

The reduction in manual tasks results in more time that can be devoted to more important tasks.

The process of writing coherent documentation for your project is a task that many companies do not take care of, but at The APP Solutions, we put emphasis on this aspect of the project’s development. No matter how great the initial technical description is, it’s typically an evolving project, especially for larger and more complex projects.

Whatever you do, no matter how much you attempt to explain everything to perfection, it is not always the case that things change once they are completed, and that should be recorded in the details of the technology. If not, nothing makes sense, and in the end, everything could end up falling apart. This is why there’s lots of backtracking and changing the code and the documentation to fit with one another.

What help do the DevOps strategy and the experts provide? Because of the clear and well-organized structure of the code, it’s less dependent on documentation. The code is understood by the code. This makes tech documentation more of a confirmation of the fact that it is a signpost of the future.

The Transparency of the Infrastructure

The second major benefit of the DevOps approach is the clarity of your code’s infrastructure.

The code is the basis of the product. But the product was developed by human beings, lots of humans, and they make mistakes and occasionally the components that they create don’t work together (despite the fact that the creators are older, and the quality assurance individuals are professional too.)

How does DevOps help save the environment? DevOps helps unify the code. It clears the code, making it more transparent and easy to work with. It also resolves any arising problem that is related to the older elements.

A side note: the transparency of the process has greatly helped in the process of welcoming new members. If everything is as clear as crystal, it’s much easier to be involved, which is an important benefit in terms of team expansion.

The infrastructure is what connects various elements of operations, such as networks, virtual machines, load balancers, and others, into a complete system that runs like clockwork.

The infrastructure of the project, just like the technology specification, develops as the product develops and frequently becomes muddy over time if no particular steps are taken to avoid this. This can seriously compromise the quality and efficiency of the operation. This isn’t the case only for cloud storage, but as well for infrastructure that is dedicated to it.

But manual configuration of infrastructure takes a lot of time and energy. DevOps eliminates this problem by switching from manually-based interaction into programming and using various methodologies, like continual integration and version control. This greatly reduces the chance of having funny or bad things happen within the system and eliminates the possibility of uncertainty.

The interaction between the infrastructure and programmes is standardized and simplified to the most essential aspects. There are patterns that the system adheres to. This allows testing as quickly as possible, which allows modifications and fixes in the early stages.

Another crucial aspect that is a crucial part of the “Infrastructure as Code” approach is code review. This helps to clarify the current situation and gives an overview for the team regarding the infrastructure’s changes. This is crucial to keeping everyone completely connected.

The final, but certainly not most beneficial, benefit of transparency and the code of conduct can be a huge simplification of the process of implementing security measures.

In general, security is the most difficult element to separate since it is separate from the primary system. The process starts with the inventory of assets and continues through access inventory and the introduction of security measures such as scanning the system.

But, with the structure clear and crisp and the majority of the operations automated, it’s not an issue to ensure the structure is secure.

If you are looking for DevOps consulting services, then Impressico Business Solutions can help. It has experienced DevOps engineers who use the latest tools to provide quality DevOps solutions.

« The Importance of Mobile App Testing